Turning into one giant open-air gallery, Vilnius, the capital of Lithuania, will be displaying internationally-recognised and local artwork city-wide all throughout the summer. The city invites visitors to discuss the artistic take on geopolitics in Baltic Triennial 14: The Endless Frontier, to hear the tales of indigenous Lithuanian dwellers, and to tour the city, encountering art displays on billboards every step of the way.

Vilnius continues the tradition of open-air projects. Last year, the city turned into a huge outdoor café to reduce the pandemic isolation of the community during the lockdowns. This summer, the capital of Lithuania has once again opened its streets to art, becoming an open-air gallery. A number of art expositions and last year’s most famous street art event, Art Needs No Roof, will take place throughout the entire city till September, allowing everyone to immerse into the urban artistic movement.

One of the most awaited expositions of the summer, Baltic Triennial 14: The Endless Frontier has attracted art pieces from Central and Eastern Europe, focusing on the geopolitical interactions between the regions. The exposition, organised by the Contemporary Art Centre since 1979, is open all summer till September 5th, creating a platform to discuss old and new ideas, the aspects of freedom and safety as well as traditional and modern values.

According to the curators of the exhibition, Valentinas Klimašauskas, a Lithuanian writer and curator, and João Laia, chief exhibition curator at the Kiasma Museum of Contemporary Art in Helsinki, Central and Eastern Europe is an important crossroads for social issues regarding ideology, ecology, and economy. The arising tensions, conveyed through the art, are also ignited by disinformation, man-made industrial disasters, oppression of non-normative identities, and nativist nationalism. 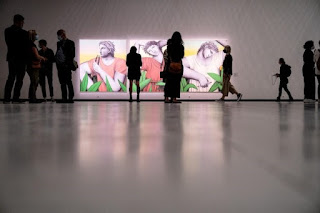 The exposition displays several artists from some of the European political hotspots, such as Belarus and Ukraine. For instance, Jura Shust, a Belarussian-born artist, presents his art display Neophyte II, which shows a group of young people hiding and performing pagan rituals in the forest where they seek freedom and safety from political realia. Similar escapism theme is navigated by the artists from Ukraine, Yarema Malaschuk and Roman Himey, in their exposition Dedicated to the Youth of the World II. However, instead of a forest, the youth choose to escape the oppressive reality by clubbing throughout the night.

The Baltic Triennial exposition is located throughout the entire Vilnius, not only turning the city into one giant outdoor gallery, but also highlighting some of the areas favoured by locals and city guests. For instance, the displays are held in the Contemporary Art Centre, Rupert, an art incubator near the highly frequented Valakampiai Beach, and a “SODAS 2123,” a cultural hub in the Station District.

This summer, Vilnius also will be hosting a range of other expositions and artistic events. The National Gallery of Art presents the exhibition Indigenous Narratives till September 26th. The exposition showcases the 19-20th century Lithuanian ethnos through the narratives of  the least modernized country dwellers.

A sound project Indigenous Phonograms by Lithuanian-based artist Marius Juknevičius furnishes the exposition with records of authentic indigenous tales about rural life peculiarities. The records have been selected from a Lithuanian Folk Phonogram Collection, included in the UNESCO World Memory Register.

A multitude of ethnographic artefacts, photograph collections, and testimonies collected from various Lithuanian museums and galleries, reveal three historical periods—the Czarist Russia, the First Lithuanian Republic, and the Soviet period—that have impacted the Lithuanian cultural memory. Aside from the display, the Gallery also offers other accompanying activities: creative workshops, and a barley field installation.

One of the most famous art projects of the past year, Art Needs No Roof, comes back to Vilnius once again to display art pieces in unexpected parts of the capital until August 1st. Last year the project attracted national attention as a way to aid artists affected by the pandemic. Now, a hundred art pieces will be exhibited in outdoor billboards throughout the city to be admired and, potentially, purchased by the passers-by. The map indicating art pieces and approximately 300 works will be also available on the project website.

Visitors will be able to attend Vilnius’ open-air gallery and see the artwork all throughout the summer
Posted by Francisco Acedo at 21.7.21
Email ThisBlogThis!Share to TwitterShare to FacebookShare to Pinterest
Labels: ART, Lithuania, Tourisme, Vilnius